Do You Need An Oil Change? | Food Confidence 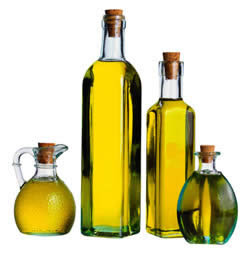 Oil is an essential part of cooking in my house – I really couldn’t stand to live without it. I use a variety of oils when cooking because they all offer different health benefits and flavors. Many of my clients are scared to cook with oil because of the added calories, and yes, oil is pure fat and at about 14 grams per tablespoon, the calories can add up quickly. However, if you measure out what you need and not have a heavy hand, you can stay on top of it and still get the health benefits and delicious flavor.

Here’s my take on a few favorites and how I use them:

Olive Oil: The most notable for heart health, olive oil is rich in monounsaturated fats and polyphenols. According to studies, olive oil contains natural anti-inflammatory compounds that do kind of the same thing as ibuprofen. Extra virgin olive oil has the most antioxidants and a rich flavor and is a catch-all oil that can be used in salad dressing, on bread, and also in a pan saute. The trick is to get a quick crust on the meat or fish and then the oil won’t get absorbed into the food. It’s not a good idea to deep fry in olive oil, but we aren’t eating a lot of fried foods, are we?

Peanut Oil: I use peanut oil (and not olive oil) when making stir fries because the smoke point is a lot higher and the flavor is not overpowering. Nutritionally, peanut oil also protects against cardiovascular disease because it contains resveratrol, the same antioxidant in red wine that is associated with lowering heart disease and cancer risk.

Canola Oil: Canola oil is a great all-purpose vegetable oil that has a fairly mild taste and is the lowest in saturated fat. It’s also rich in omega 6 and has more omega 3 than most other cooking oils (except for Flaxseed oil). Canola is a perfect substitute for butter, so I use it mostly when I bake (which is not often due to an apparent lack of skill in this area). I also use it when I don’t want the flavor of olive or peanut oil in my dish. The health benefits of canola oil are sometimes debated because of its confusion with rapeseed oil, which contains erucic acid, a substance that can be toxic to humans. Canola oil is actually produced from the canola plant and has very low levels of erucic acid.

Sesame Oil: Sesame oil comes in either dark or light varieties. The dark (made from toasted sesame seeds ) is more of a specialty oil. I use only a small amount for flavoring when making Asian dishes (like stir fry). I also top off a homemade salad dressing with a 1/2 tsp or so of dark sesame oil to give it an Asian flair. The light sesame oil (made from untoasted seeds) has a nutty flavor and is safe for frying. Both are rich in vitamin E and small amounts of magnesium, copper, calcium, and iron.

Flaxseed Oil: Flaxseed oil has the highest concentration of the omega 3 alpha linolenic acid (ALA) and is a precursor to DHA, the type of omega 3 that’s in fatty fish. Because of this, flaxseed oil is considered a heart healthy oil. Make sure to store this oil in the fridge, it is highly perishable and should be not be used in cooking. I use it mainly in salad dressing and smoothies.

Walnut Oil: Walnut oil is an unrefined, delicate, and flavorful specialty oil (it’s also a bit on the expensive side). It’s rich in omega 3 and the antioxidant ellagic acid, which plays a role in preventing cancer and reducing oxidative stress. Not a cooking oil, I use walnut oil in salad dressings, in prepared dips and spreads, and I frequently toss with pasta. It has such a unique flavor and brings a great richness to any dish!

Things to consider when buying and storing oil: How they get the oil out of the plant or seed makes a big difference in the health benefits and quality of the oil. Whenever possible, opt for organic, unrefined oils that have been cold-pressed. Doing this will ensure no heat or chemical extractors were used during processing (all of which can destroy the vitamins and other nutrients in the oil). Also, buy oil sold in dark colored bottles and store in a dark, cool place for no more than six months (light and heat can turn oil rancid).

There are many other specialty oils out there that are delicious and can impart a rich and unique flavor to food. What are your favorites?

Releasing judgment — of food and yourself — is

Best thing about doing cooking demos in my kitchen

Should You Be Eating Microwave Popcorn? Back to School: Tips For Packing Kids Lunch & Snacks
Scroll to top