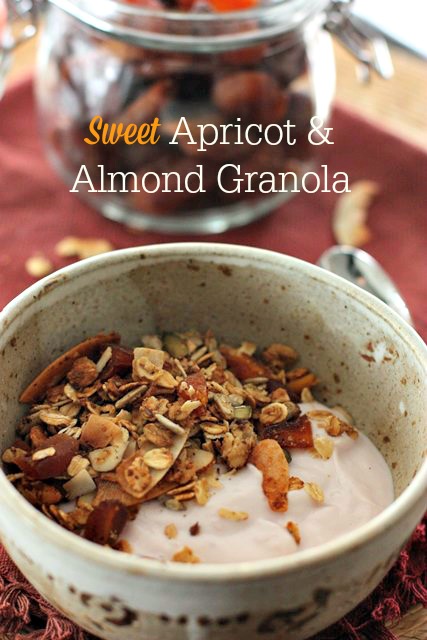 I’ve never made granola before. Not sure why, I just never thought I would like it. I had no idea I was totally missing out. I made this apricot granola as a request from the hubby, who was mesmerized by Bobby Flay whipping some up on The Food Network. He only recorded the last 5 minutes of the episode, but I saw just enough to take a stab at it. 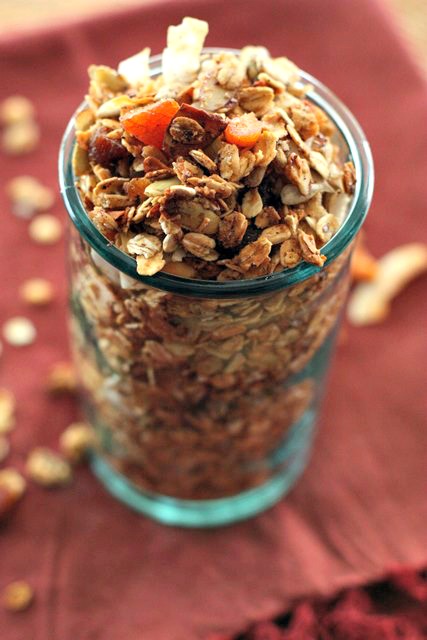 What you’re seeing here is attempt number two. The first batch started off really lovely going in…I used my cereal swag as the base, thinking that the currants and goji berries would go great with the apricot. Yeah…that batch came out with the dried fruit resembling black sticks and twigs. I learned that 30 minutes is about 10 minutes too long for bake time. 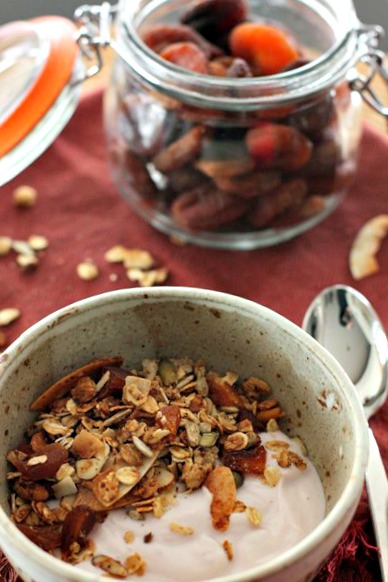 The second batch came out much better. Beautiful, if I don’t say so. I didn’t use my cereal swag the second time, but stuck with the gluten free oats as the base. I mixed in all my favorites: thinly sliced almonds (I love the dry roasted slivers from Trader Joes — so thin and crunchy), raw pumpkin and sunflower seeds, big coconut flakes, some flax and wheat germ. And I got smart and added the dried apricot after baking it.

It’s so dang tasty I’ve eaten more of it than Hany has. He likes everything a bit sweeter than I do, and he actually said this was not sweet enough for him. Which means that it’s perfect for me! So feel free to adjust the sweetness as you see fit. Mix some into your Greek yogurt, cottage cheese, add it to your salad, or sprinkle over banana soft serve.

Releasing judgment — of food and yourself — is

Best thing about doing cooking demos in my kitchen